Opera in three acts.It will be presented in a semi-staged concert version.

Libretto by Francesco Maria Piave, based on the novel and theater play La Dame aux camélias (1848 and 1852), by Alejandro Dumas Jr.

Choir and Orchestra of the Teatro Real 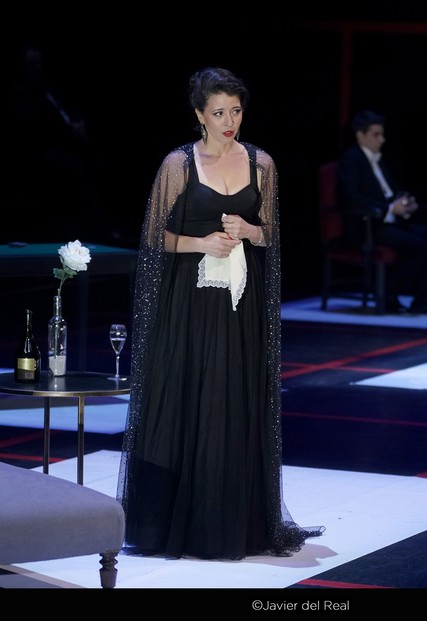 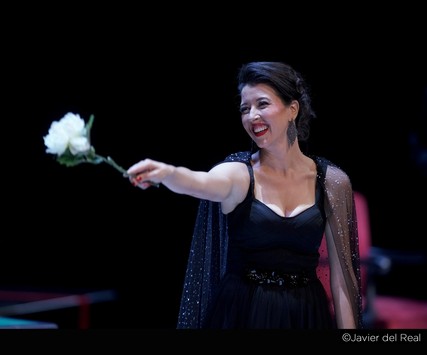 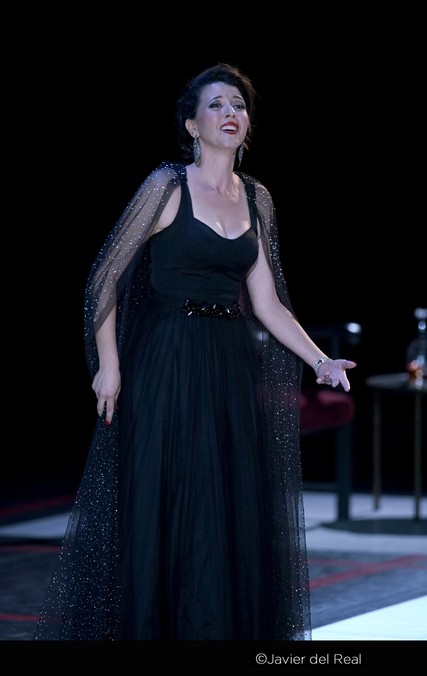 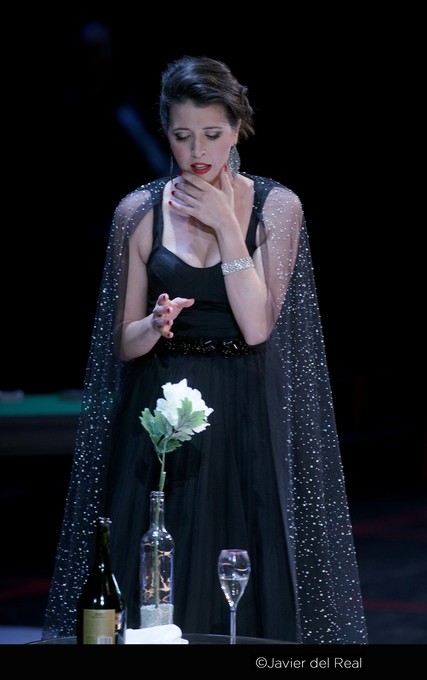 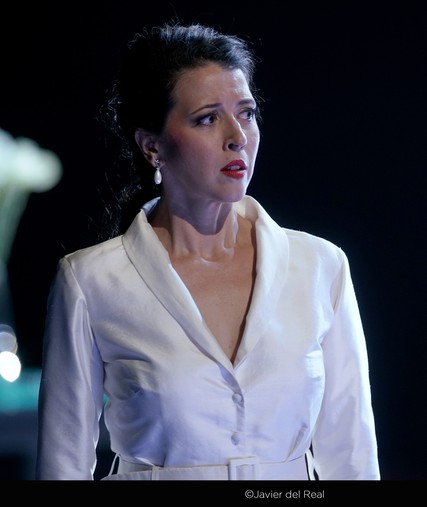 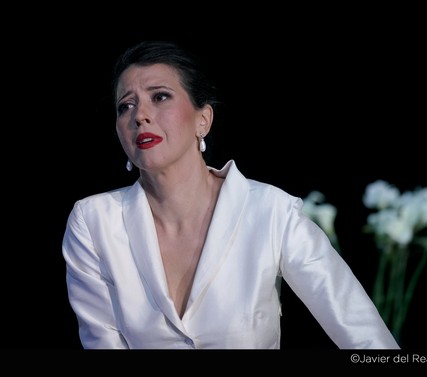 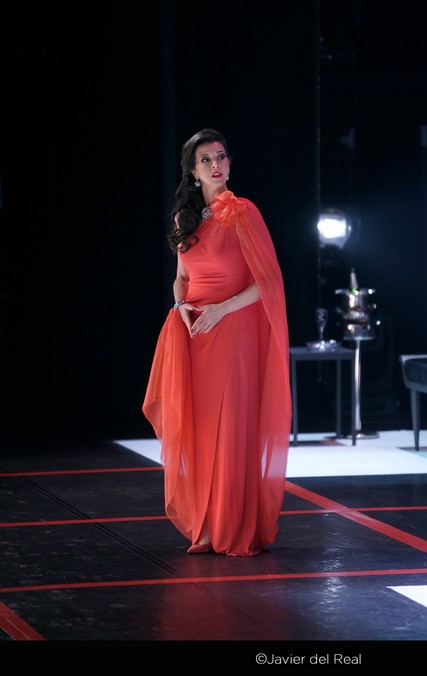 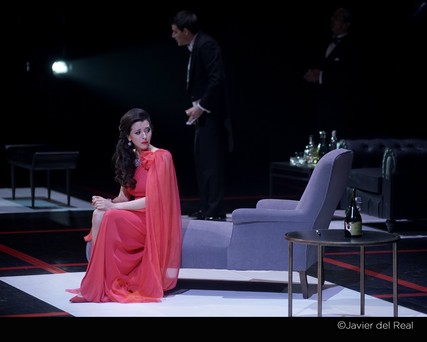 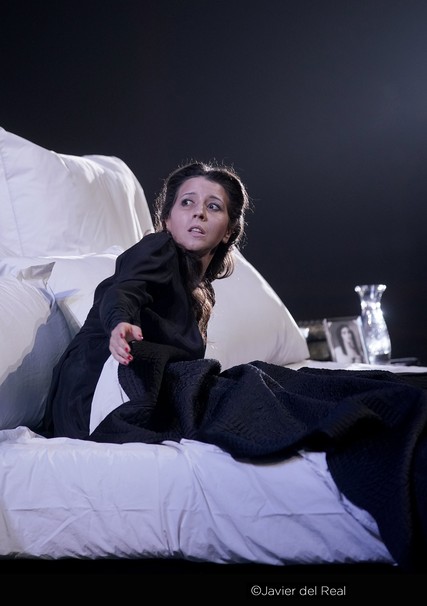 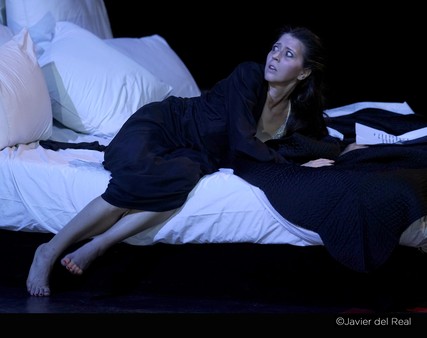 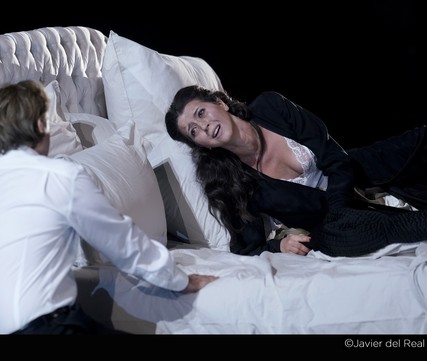 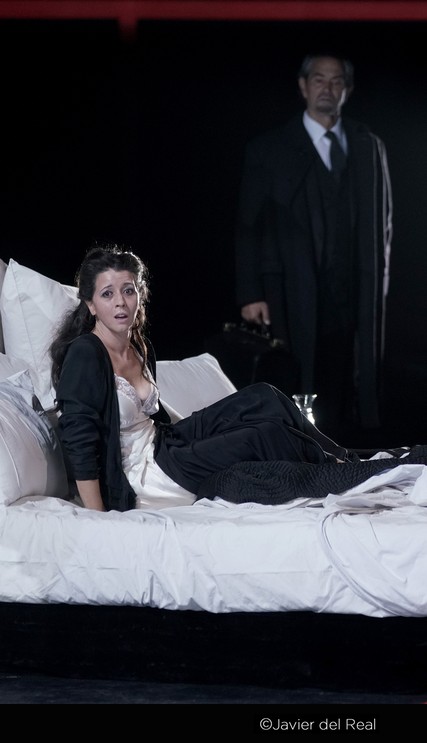 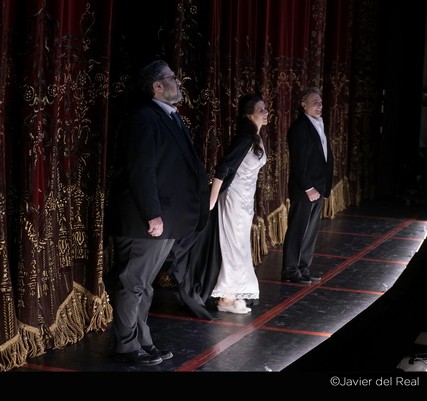 Lisette is interviewed in El Mundo, following her success at the Teatro Real in La traviata

One of the few people to perform a bis at the Teatro Real.

Now, in the final stretch, Lisette Oropesa arrives.You have to go see it, and especially to listen to it.Even if it is only for the few seconds in which her Amami Alfredo transports us to the great ones that we all have engraved in our brain, which is the best hard drive that can exist.

It is true that we are in need of beautiful things.And it is no less true that the Oropesa gives us the ear.When we still remember his Lucia from two years ago (and his Gilda del Rigoletto from 2015), now comes his Violetta, which enshrines her in the Real: from chaste diva, chaste goddess, to absolute diva.But with the closeness that the divas of the 21st century require.Her elegance on stage, in addition, adds many points.

El Real, we insist, is at fifty percent capacity for health reasons.Those who were on July 18 filled all the gaps with applause;a welcome that makes history.The shadow of the encore flew over the room after his sublime Addio del passato of the final act.Just as the illusion that he would come out to be applauded behind the curtain that closed the first one also flew overhead.As before, as could be done when the voice prevailed.

I well remember the impact that the soprano Lisette Oropesa caused exactly two years ago with her Lucia di Lammermoor at the Teatro Real, together with the tenor Javier Camarena. For her naturalness, for her magnetism, for her careful technique, for the closeness of her singing ... And all this has once again marked her return to Madrid, embodying a very close Violetta, with whom it is inevitable to empathize. There is a rare mix of control and emotion in Oropesa's song. Naturalness and technique converge in her doing, in a very chosen, almost select way. Oropesa is a singer of palpalbe intelligence, aware of her means, who manages and manages in such a way that they seem to redouble her potential. Its material, with a pleasant natural vibrato and a slightly dark color,with a barely metallic timbre - it sometimes reminds me of Gheorghiu in its beginnings - it manages to flow with distinguished naturalness. His first act was a paragon of virtues, crowning with an E flat that was nothing but the icing on an exhibition of technical resources, despite a slight fatigue in the last section of 'Semper Libera'.

Already in the second act, Oropesa once again exhibited a prodigious ability to manage his means, singing in a low voice the 'Dite alla giovine', putting the hair on end and creating an atmosphere of outstanding theatricality, as had already happened in the first act with a masterful and chilling 'Ah, maybe him'. Her composure and dignity, in dialogue with Germont; her despair later when she met Alfredo again; and finally his heartbreak when he faced death in the third act. All this reflected Oropesa's voice with amazing ease and with palpable truth. There were even moments in which his voice seemed to double its flow, as in that thrown 'Amami Alfredo quant'io t'amo', with the pit at full throttle. As a final,crowning the page with a sharp A that he regulated at will, in 'Or tutto finì!'. In short, and in short, an anthology Violetta.

Second and third acts require a soprano of more robustness and dramatic substrate, but the Oropesa shows off her weapons, namely, remarkable vocalist skills and sincere expression, without artifice, or any room for excess.An example of this was the precise attack in pianissimo and link with the phrase "Dite alla giovane" in the great Duet with Germont Sr. [climax of the work] in which an impeccable spianato sostenuto song [flat song with a slow rhythm, without ornamentation and based on long values], firm and full of morbidity compensated for the lack of timbral width to fill the Verdi phrase.Likewise, the "Amami Alfredo" achieved an impact in the room, first because it was vocally and technically irreproachably reproduced and the expression, in the absence of greater doses of punch and charisma, treasured frankness and truthfulness.It is also fair

The sensitive and musical singing of Oropesa and his control of the emission and the column of air were imposed on the personality and dramatic force (appreciable deficiencies in that speech of the reading of the letter "You have the promessa") and on a timbre far from be patrician in the aria "Addio del passato" and also in "Prendi quest'è l'immagine" of the third act.Indeed, pure singing and outstanding vocal skills, especially in Italian opera, are genuine elements of pathos and expression.

But if this particular performance is memorable, it is because of the magnificent performance by Lisette Oropesa.The memories of her Lucia from last summer still alive in this very place, the American soprano (and now Spanish nationalized) offers a dramatically overwhelming and vocally very own portrait of the protagonist.If we look at the cliché of Violeta's three voices - light, lyrical and dramatic - Oropesa is situated in the initial part of the triad, and there he remained throughout the performance.She solved with ease and comfort the agility of the first act while showing us a timbre that, without being very rich in harmonics, seduced us by brightness and homogeneity.A beautiful legato song and a very careful diction - every word was understood,each inflection in each syllable - demonstrated during the second act the technical quality of this artist.And in the final part, the lightness of her instrument managed to outline a delicate Violet, fragile to the point of breaking at any moment.The masterful mastery of pianissimo and dynamics presided over the final part, shattering the myth that a more bodied voice is essential for the outcome, and leaving the unforgettable memory of an “Or tutto finì” issued as an exquisite and eternal floating row. .

Lisette has given 28 performances as Violetta Valery.