Production a gift of The Paiko Foundation 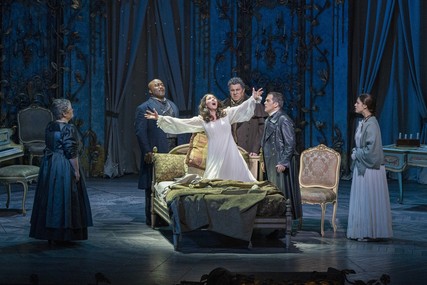 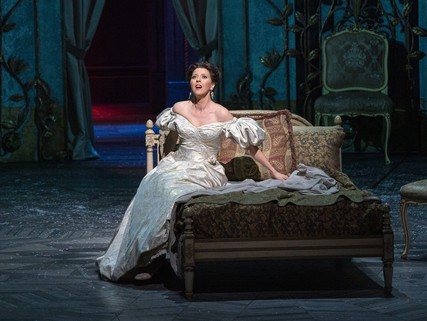 Lisette is interviewed on Living the Classical Life

Lisette presented this year's MONC finals and contributed to the first increase in prize money since 1998.

Lisette Oropesa on the cover of InRegister Magazine

Lisette Oropesa on the cover of InRegister Magazine for February 2020

Lisette is on the cover of Opéra Magazine for February 2020

Lisette is interviewed in the Associated Press

Lisette is interviewed by the Metropolitan Opera

Lisette Oropesa is the winner of the 2019 Beverly Sills Award

In Act I, when Violetta, a charming courtesan, is throwing a lavish party, a soprano must summon flights of coloratura brilliance and coquettish sparkle. Ms. Oropesa breezily dispatched runs and embellishments as she mingled with her guests and met Alfredo, the smitten young man from a bourgeois family who has been pining for her from afar.

Yet you could detect a trace of forced vivacity in Ms. Oropesa’s interpretation, an intentional touch of tremulous fervor in her sound, even as she let bright-voiced, ebullient phrases soar. Here was a young woman determined to prove that she was undaunted and would remain, as she later sings, “sempre libera”: always free.

There’s a melancholy feeling that very occasionally accompanies the greatest performances. Tangled up in the thrill of witnessing a historic interpretation of an iconic work comes the sad realization that you may never encounter its equal.

The Metropolitan Opera has seen a number of superb sopranos appear as Violetta Valéry in the past decade: Diana Damrau, Natalie Dessay, Sonya Yoncheva, and Angelina Gheorghiu are just a handful of the most recent leading artists to make a mark in La Traviata’s touchstone role.

The sensational performance that Lisette Oropesa gave on Wednesday night in her role debut at the Met deserves to be counted in the very first rank.

Oropesa brings a voice ideally suited to the role: direct and lively, bright yet round, so focused you can almost see it as it pierces through the air of the auditorium and slams into the back wall. Yet even with its power and laser clarity, her soprano never feels aggressive, as she wields her instrument with musical sensitivity and classic elegance.

Lisette Oropesa, taking on the role at the Metropolitan Opera for the first time (according to her official website she had taken it on just 11 times prior to this run), is one of the few artists that can manage to pull off the role with not only the dramatic temperament, but also the vocal consistency.

She gave a stellar performance that showed a firm grip on all the facets of the role--the coloratura, the drama, the pathos, the glamour.

She was the party girl of Act I, the delirious lover and compassionate figure of Act II, and the dying woman of Act III, each perfectly placed, each cannily acted. Whether she was singing the joyous "Sempre libera" at the opera's start or the woeful "Addio del passato" at the end of Act III, she was in full command of all that was demanded of her. She had good backup from the Met Orchestra, under Bertrand de Billy, with the usual stellar work of the Met Chorus, under Donald Palumbo.

Lisette has given 32 performances as Violetta Valery.