In Verdi’s classic work, Parisian courtesan Violetta surrenders her last hope of personal happiness for the sake of her lover Alfredo’s reputation. Though she is a “fallen woman,” Verdi’s empathetic and vivid score maintains her dignity and the audience’s compassion. Daring production choices encourage modernity and tradition to collide via a golden-hued Baroque stage and a midcentury fashion sensibility. This bold setting creates a unique canvas upon which to experience an unforgettable La traviata.

Soprano Lisette Oropesa, hailed as “irresistible” and “magnetic” by The New York Times, makes her Opera Philadelphia and role debut as Violetta, the woman who risks everything for the man of her dreams, Alfredo (tenor Alek Shrader in his Opera Philadelphia and role debut). Standing in the way of their happiness are society’s mores, espoused by Alfredo’s father, Giorgio (baritone Stephen Powell). This lush new production is directed by Paul Curran, an outstanding artist who has collaborated with great opera companies all over the world. Jack Mulroney Music Director Corrado Rovaris conducts the Opera Philadelphia Orchestra.

La Traviata will be broadcast free to Philadelphia residents on Saturday October 3rd. Visit Opera on the Mall for registration details.

Directed by Bruce Bryant of operasimulcast.com 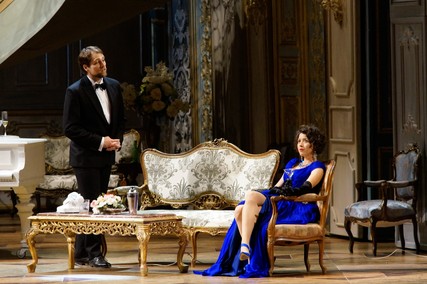 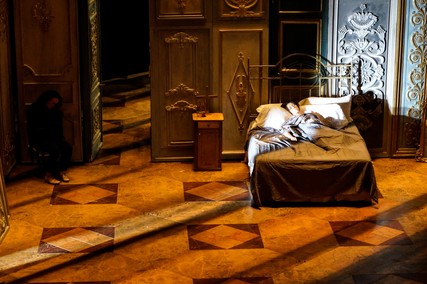 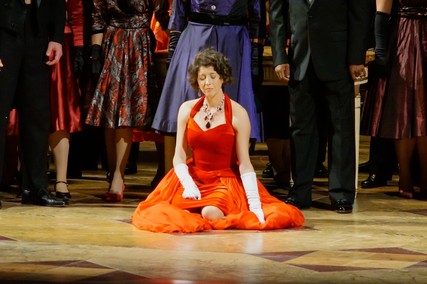 A plethora of livestreams coming this October, many for the first time!

Lisette Oropesa is interviewed in PhillyMag by Bryan Buttler.

It is possible for a lyric singer to be a great Violetta – among recordings, one I treasure is Bidu Sayão from the Met, who imprinted the role with her distinctive prettiness and pathos. It was Sayão I thought of as I heard how easily Oropesa’s voice carried in the large space, and how elegantly she shaped every phrase, always making the words matter. Throughout, there was telling attention to detail, from the little internal trills in “Sempre libera” that hardly any sopranos today bother with, to the gorgeously tapered phrase endings in “Addio, del passato.” And of course, it helps that Oropesa, like Sayão, is ravishing looking – in her 1950s gowns here (see more on that below), she resembled Pier Angeli.

...and the outstanding Oropesa brings psychological depth and emotional expressiveness to her sympathetic character, ranging from–and equally masterful at–the ebullient bel canto and decorative coloratura of Act I to the scaled-down drama and poignancy of Act III.

In fact, Ms. Oropesa, the dramatic soprano who stars in the staging at the Academy of Music, brings so much gusto, so much soul to her Violetta, that it is sort of a miracle that the entire stage doesn’t blow up at the end of the three-hour show. Yes, she’s that good, and I’ve never seen an Opera Philadelphia audience react with such fervor to a performer in recent memory.

Through a series of stepped vocal shadings over more than two hours, she embraced Violetta's bubbly spirit, infused it with the pale resignation of the dejected lover, and, ultimately - in following one of Verdi's shrewdest emotional zigs - beautifully navigated the last moments of a euphoric consumptive. Oropesa has the instrument for the role, and she has the emotional intelligence.

Her performance grew. If in "Sempre Libera" Friday night her intonation and note placement were pinpoint accurate and her sound commanding, by Sunday afternoon the aria had acquired nuance. With her added lift on the word translating as "free," you felt buoyed.

It will be remembered as a 'were you there the night' soprano Lisette Oropesa made her debut as Violetta in "La Traviata." At the end, when the curtain closed and came back up on Oropesa standing alone on the stage, the whole Academy audience bounded to its feet, shouting and lustily applauding for after her spellbinding performance in one of the most vocally and emotionally demanding roles in all of opera.

To judge from her first attempt at the role (heard Oct. 9), Lisette Oropesa bids fair to be among its great exponents in her generation.

Lisette has given 31 performances as Violetta Valery.