Lisette will give a recital with the Gstaad Festival in Feburary 2020.

C.DEBUSSY
Romance
Beautiful evening
Christmas for children who have no more house 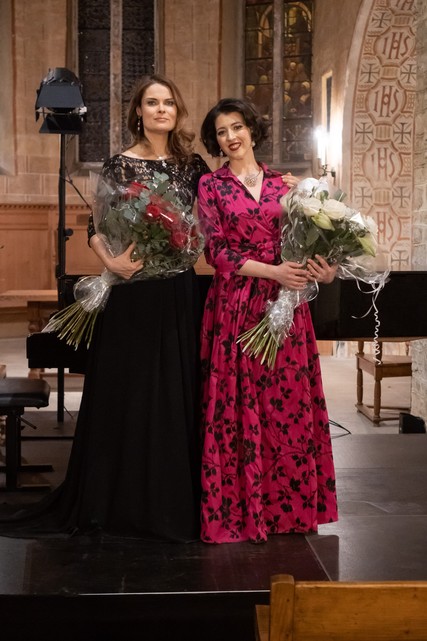 One of the highlights of the 2019-2020 edition of the Gstaad New Year Music Festival was the recital of the American soprano Lisette Oropesa.In rehearsal in Paris for Le Barbier de Seville, the singer did not hesitate to make a quick return trip to Gstaad, despite the strikes in France and their batch of trains canceled, to offer a memorable evening.The program was particularly varied and eclectic, alternating opera arias and lieder, in four different languages.Unmistakable charisma, clear and luminous voice, ample and majestic, healthy and homogeneous over the whole range, with brilliant treble and perfectly assured vocalizations, Lisette Oropesa has everything to make a good career, and besides the biggest scenes are l 'tear.In Gstaad, she was especially able to highlight her musicality, her impeccable diction,whatever the language sung, and its sense of expressiveness, playing on each word, each sentence, each inflection of the score, whether in melancholy and sad compositions or in flamboyant and brilliant pages.She was accompanied on the piano with finesse and tact by Natalia Morozova, a follower of Gstaad since she has been performing there for ten years.

In the little church of Rougemont, she offers an original, diversified and balanced recital, in which she can showcase all the facets of her art: in fact, she deploys the evening during treasures of charm, intelligence and of sensitivity.The belcanto is first honored thanks to the famous "V'adoro pupille" extracted from Handel's Giulio Cesare, then to the air "Come dolce all'alma mia" taken from Tancredi by Rossini.His prodigious technique allows him an almost infinite range of colors, dynamics, breathtaking mass and ineffable pianissimi.Of Cuban origin by his parents, we then savor his impeccable Spanish in "De Espana, vengo" (El nino judio de Luna Carné),

But most of the evening will be devoted to the German Lieders, with the Drei Lieder der Ophelia by Richard Strauss and various Lieder by Schubert including the sublime "Marguerite au rouet" (Gretchen am Spinnrade).The first cycle offers Lisette Oropesa's voice their miraculous melodic drawings and the opportunity to display the most varied colors.In the Schuberts, each of the retained tunes takes its poetic charge in an iridescent murmur of the infinite nuances of an inspired voice.French music - remember that Lisette was born in New Orleans and she speaks perfect French - is also part of it with a Romance by Debussy, then the air "Je vais par tous les chemin" drawn by Manon de Massenet.In the second tune, she pays the luxury of retaining her voice, to better release the emotion,and the unique bis will also be extracted from our national heritage, the air of jewelry in Faust ... which won him a triumph;in fact, what an art to apply - as with a brush - the colors on the vowels without giving up virtuosity!

When was the last time you caught your breath in surprise? Anyone who is passionate about concerts and frequently attends will agree that this is fairly rare and only happens when expectations are well and truly exceeded. Top performances are always expected from well-known stars but expectations not always met. However, if you sit in a concert at a small music festival where the names of the artists are unfamiliar, the surprise is all the more intense.

This is how the audience found the performance by Lisette Oropesa and Natalia Morozova in Rougemont church. The warm timbre of the soprano was already very moving at the start of Handel’s "V’adoro pupille" by Giulio Cesare.